Ben Patterson’s installation "Why People Attend Bars: To Be Seen, To Be Heard, To Be There" together with Ben’s Bar is present in its newest location and on permanent display on the third floor of the NKV. Participating in the events of 1962, Benjamin Patterson is one of the main Fluxus protagonists who has made Wiesbaden his home for over 25 years.

Ben Patterson’s installation is located in the entrance of the exhibition space. In aggregate, it is a room that appears to be a reenactment of a once ritzy bar partially done in a rococo style, or so it seems. One comes in contact with a golden fountain and an alluring image of Venus adorned in a brassy golden frame. The floor-to-ceiling wall piece is covered in a thick brocade-like fabric upon which is mounted a three-panelled mirror with two marble-topped jutting drawers hand-painted in gold. Antique lamps hang on both sides of the mirror illuminating the piece and the three tiered bar counter with familiar bar paraphernalia such as a transparent plastic tip holder in the shape of a car as well as several shot glasses, a beer mug, a shaker and two metal labels, “scotch" and “rye", hanging from the drawer handles. The text Why People Attend Bars: is mounted in black painted plaster lettering onto the fabric wall and consecutively on each mirror panel, golden stencil letters spell the text, To be Seen, To Be Heard and To Be There. On the right of the mirrors are two mannequin hands and a figure of a cherub, all painted black. Two black-painted cast iron chairs with cushions matching the heavy brocade-like fabric on the wall placed in front facing outwards generate a welcoming feeling.

Most of the objects the artist found on Canal Street at various antique stores, “...when Canal Street was still Canal Street" (BP) except for the wood for the bar counter which has a story of its own, having been discovered in the shape of a fallen, dried out walnut tree at artist and friend Bob Watts’ countryside home in Pennsylvania. In its original version in New York City, the piece consisted only of the wall piece and chairs. There as well as in its first Wiesbaden version in the Social Headquarters (2002-2007), the chairs faced the bar rather than the room as in the Nassauischer Kunstverein. While the ACME Fish, Ben’s Bar sign, the fountain and Venus were all additions that came later in the Wiesbaden period the piano has been added to the installation at the Nassauischer Kunstverein.
The installation is as candid in its representation as it is straightforward and stems from a period in the artist’s life when he spent “much time in bars" (BP). If the question “Why do People Attend Bars" came to him in a moment of contemplation, the answer he provides in this personal reverie with the words “to be seen, to be heard, to be there".

The installation was originally constructed in 1990 for a group show at Salvatore Ala Gallery in Soho called "Fluxus Closing In". This indelible exhibition included putative Fluxus artists such as Nam June Paik, Larry Miller, Yoko Ono, George Brecht, Bob Watts and many other familiar Fluxus-associated names. Almost twelve years later in 2002, the installation would travel from a storage space in New York City and “reincarnate" (BP) into the environment Ben’s Bar, located at the Social Headquarters for the Friends of Fluxus here in Wiesbaden.

Ben’s Bar was an idea Benjamin Patterson conceived as a meeting place for people who were interested in Fluxus. When the piece Why do People Attend Bars arrived from New York, the idea conjoined with the 2002 Fluxus citywide exhibition "Forty Years: Fluxus and Followers" curated by René Block and Regina Bärthel. Ben’s Bar was situated on the ground floor of the oldest bath house in Wiesbaden located on Spiegelgasse 9, in the center of town. It was open daily to the public during the exhibition period after which it would continue as a meeting place opened only on Monday nights. In addition, Ben’s Bar was active for art exhibition openings that took place in the remaining 12 cubicles of the bath house on Spiegelgasse. Ben’s Bar gradually turned into a more social bar where less and less of the Fluxus people were involved.

Benjamin Patterson’s contribution to contemporary art has been little in quantity but revolutionary in its impact. His life-long involvement in the arts spans decades and his artistic achievements involve numerous experimental performances, musical scores, installations and art objects along with many other happenings and actions that have represented in whole the many gestures of his artistic expression which will continue to influence generations to come. Considered one of the first generation Fluxus founders, Benjamin Patterson is as humble as his work is abundant. It is with great pleasure that the Nassauischer Kunstverein Wiesbaden houses this work from one of the protagonists of contemporary art history. 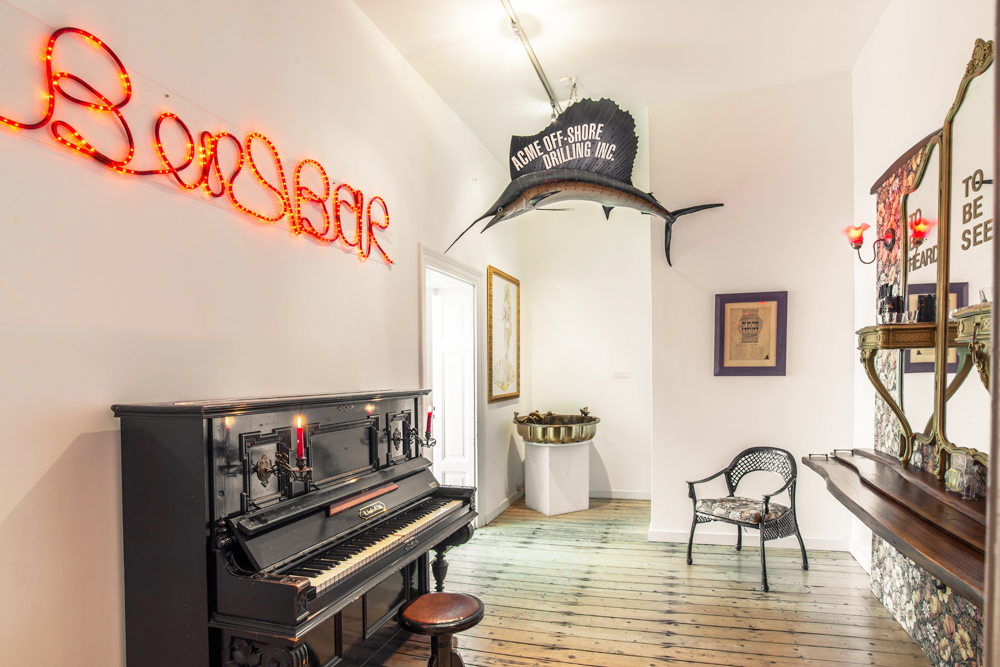 Benjamin Patterson: Ben’s Bar, Why People Attend Bars: To Be Heard, To Be Seen, To Be There, Photo: Christian Lauer