Works by Ella Ziegler (* 1970) were already on view in the exhibition 40 Years: Fluxus and the Consequences in Wiesbaden, curated by René Block. In a subsequent solo exhibition, she developed a close connection to Wiesbaden - for the Nassauischer Kunstverein a special outdoor project was created in summer 2004:

A 1:10 scale model of the Kunstverein Villa at Wilhelmstrasse 15 has been created that will be installed as a duck house on the Warmer Damm. The miniature art association allows the Wiesbaden ducks to visit the Nassauischer Kunstverein

"It can't be that in a city like Wiesbaden the ducks have to live in huts ..." (Ella Ziegler).

Ella Ziegler is building on the idea of ​​one of the Kunstverein's most popular projects - the exhibition “Everywhere is Duckburg” (December 7, 1986 - January 18, 1987) and continues this in her ironic, analytical way of working. Ella Ziegler collaborates with the "unknown" in her contextual projects. Her art has no preprogramming, rather it arises from walking, moving, traveling. In her work, she addresses everyday urban culture and its significance.

The Nassauischer Kunstverein Wiesbaden is in "its own house" at Wilhelmstrasse 15 since 25 years. The Entenhaus project links this pleasant cultural-political event with the current Wiesbaden art summer of 2004, and forms a cultural axis along Wilhelmstrasse from the Landesmuseum, Nassauischer Kunstverein, Villa Clementine, Bellevue Hall and Hessian State Theater with the temporary sculpture park in the park.

The realization and installation of the model was carried out by the design and architecture office AIDA, Wiesbaden. 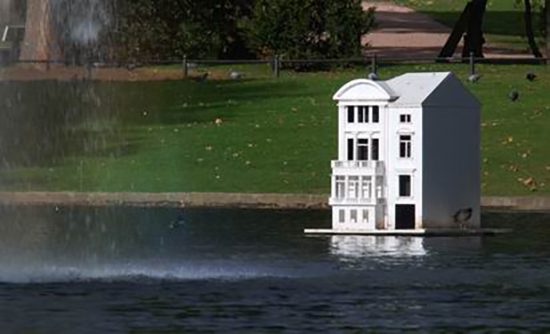